The Skinny on Fat Man’s

In the 1940’s, Horace Usry, The Fat Man, took over his father Darnell’s grocery store, changing the name from Sanitary Curb Market to Fat Man’s Corner. Soon after, the first restaurant, The Pit, appeared as a natural extension into food service. The Fat Man was an entrepreneur and promoter long before those words were used in business. The Fat Man’s Corner thrived for years and eventually produced one of Augusta’s landmarks, Fat Man’s Forest. What followed was a domino effect of new profit centers, including: year ’round Christmas decorations, Christmas trees, a pumpkin patch, Halloween decorations, a haunted house, costume rentals, party supplies, and so much more! The product was a seasonal store was a “one of a kind” wonderland. As the store grew and expanded, The Pit  (later named Fatsville Chow and then Fat Man’s Cafe) was always there serving up Miss Pearl’s famous fried chicken and squash casserole. Fat Man’s Forest sadly closed in 2008 when MCG purchased all the businesses’ land from the Usrys, but the Fat Man’s food service continued. Now located at historic Enterprise Mill, Fat Man’s Mill Cafe along with the Enterprise Mill Events Center carries the Fat Man’s name and tradition of top quality and friendly service. From events to catering to dine-in lunch the Fat Man’s still does it all!

The Usry family’s Augusta business roots run deep. Brad grew up in the business hanging around Fat Man’s Corner absorbing the business as a kid. After college graduation he jumped full steam ahead managing the grocery store, cafe and assisting at Fat Man’s Forest. He became President of the company in 1987. Brad spearheaded major growth at Fat Man’s Forest and led the expansion of the company with the openings of Cotton Row Cafe, Fat Man’s Riverwalk, and Fat Man’s West. Havird, known to most as Hav, grew up in the Cotton Row Café and The Pit running around as a kid helping his dad or Grandmother, Carolyn Usry. This was the fuel for his passion of business and culinary arts.

Since relocation to Enterprise Mill in 2009 the business has experienced major growth. Brad and Hav’s goal is to bring southern hospitality to the world through their lunches, catering, venues and service. 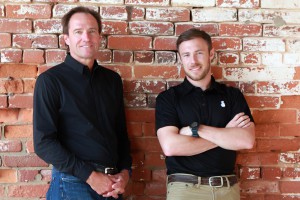 Brad Usry, President, and Havird Usry, Vice President of Operations and Development, team up to manage their growing business. As the third generation begins to take over the popular business it is positioned for growth and expansion in the future.

Brad was born and raised in Augusta. He graduated from Augusta College with a BS(NO! not that BS) in Management. While at AC Brad played basketball, where he Captained the team his senior year, and, more importantly, met Paige Hodges, who he married in 1982. Brad and Paige have two boys, Havird and Hodges. Paige is a personal trainer, nutritional consultant and coach. Hodges is a videographer and video producer/director.

Havird, also an Augusta native, graduated from Clemson, where he was four year letterman in soccer being named MVP his senior year. He left Clemson with a degree in International Business and Spanish. After he pursued pro soccer briefly after graduation he was naturally drawn back home to jump into the family business. Havird has led and managed major growth in the business over the past 7 years. Hav and Brad thought the next step for their business was to be more culinary based. This led Hav to Helm’s Culinary Institute, where he graduated as an Executive Chef, first in his class. Hav is married to Dr. Brooke Harrison Usry, who has a Dental practice in North Augusta, and they have a beautiful daughter, Hudson Grace. They also have a really cool dog named Otis!